New Edgecliff Theatre opens its season with a crowd-pleasing revival of "Equus," a psychological drama infused with big theatrics. It's terrific seeing a small, independent theater pulling out all the stops and making the play work on its intimate stage.

Just about everything comes together at New Edgecliff. Director Alan Patrick Kenny gathered some of the city's best, mostly non-Equity acting talent and was inspired to set all the action in the "stable." The setting, with a stable wall sketched in at the rear of the set, the horses stalls implied behind sliding double doors, provides a constant reminder of Alan's horrific crime. It also solves the problem of many scene shifts which the theater can't accommodate. So hay bales stand in for chairs and beds with perfect logic. Kristen Robinson gets credit for the best New Edgecliff set design in memory.

Davenport, a 2009 grad of Northern Kentucky University, approaches big, flawed characters with control and abandon, and he beautifully communicates all of Alan's terrible secrets. While Alan and Dysart are at the center of "Equus," there are rich supporting roles. Start with Regina Pugh and Mike Dennis as Alan's parents. Pugh (also an Equity player) and Dennis are splendid as the combatants in a tense household that's a mire of religious, sexual and control issues. Aretta Baumgartner is having a heck of a year, with standout after standout supporting turn, equally strong in straight plays and musicals. Here she's the magistrate and close friend to Dysart who brings him Alan's case. Sara A. Clark, a member of Cincinnati Shakespeare Company, is compelling as the girl who seduces (well, almost seduces) Alan, triggering his crime.

Whether or not it’s a deathless classic, the jury’s still out on that — here’s what’s certain: 35 years later Equus feels undated if not yet timeless. And it’s as provocative as ever, especially in an energized New Edgecliff Theatre production that masters its theatrical challenges, explicates its thought and, most importantly, confirms the level of assurance and artistic maturity that NET showed in recent productions of Glengarry Glen Ross and Death of a Salesman.

Director Alan Patrick Kenny has enriched the script’s ritualistic structure by giving the stagecraft a ritual tone. Cast members add sound effects, move set pieces and focus attention with lighting instruments. He has drawn electric performances from all nine cast members then melded them into a seamless, relentless, electrifying whole.

Davenport plays Alan Strang with absolute authority in movement and reveals the boy’s desperate character down to its depths. Shooner eschews irony and makes Dysart blunt, sympathetic and frankly terrified. Baumgartner gives perhaps her strongest performance ever. Clark makes the girl warm and winning. Dennis and Pugh are admirable as the parents. In an impressive combination of acting and athleticism, John Scheller plays a young horseman and the great horse Nugget simultaneously.

Technical credits are excellent, especially the intuitive soundscape Paul Lieber created to support most of the action.  Critic’s Pick. 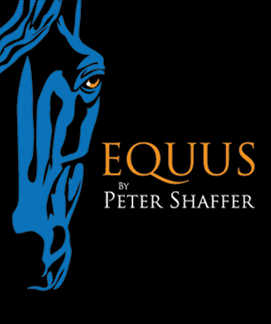